Kolkata:Around 80.43 per cent of 7.5 million electorate exercised their franchise till 1800 hours on Thursday in the second phase West Bengal Assembly election to 30 seats to decide the fate of 171 candidates, an Election Commission (EC) official here said. 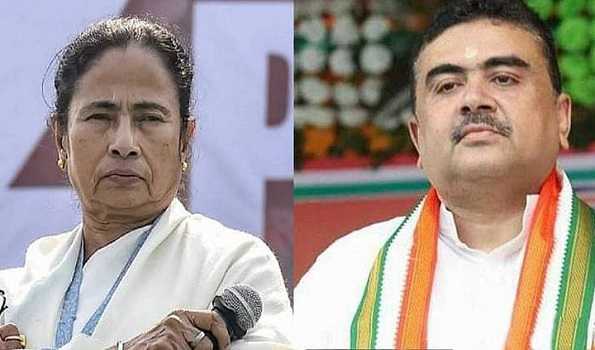 Bankura district with 82.78 per cent witnessed the highest turnout, while South 24 Parganas registered the lowest turnout at 79.66 per cent till 1730 hours.The ruling Trinamool Congress has filed a complaint with the Election Commission, alleging booth capturing by BJP workers in the Moyna constituency.


“BJP workers are attempting to take control of EVM and are rigging the booth,” claims the complaint. “The CRPF deployed at the booth is not taking any action.”West Bengal Chief Minister and Trinamool Congress (TMC) supremo Mamata Banerjee, whose presence in Nandigram triggered massive face-off between TMC and BJP supporters, has dialled Governor Jagdeep Dhankar, seeking 'free and fair' election.
She said, "...They didn't allow the local people to cast their vote. From morning I am campaigning...Now I am appealing to you, please see..."When asked if an FIR will be filed over allegations of booth rigging at Gokul Nagar polling booth where she visited, Ms Banerjee said, “We will check all footage of the polling booth and take appropriate steps.”
The Governor in his reply said, Issues flagged @MamataOfficial a while ago on phone have been imparted to the concerned. There is full assurance of the concerned to adherence to rule of law."
“Am confident all will act in right spirit and earnestness so that democracy flourishes,” Mr Dhankhar added. Over hundreds of supporters from both the sides are currently present outside a booth at Gokul Nagar in Nandigram.


Earlier, the massive face-off broke out between the supporters of the ruling Trinamool Congress (TMC) and the BJP at Gokul Nagar in Nandigram over Chief Minister Mamata Banerjee's presence at a polling booth.Two groups of people clashed with each other after Ms Banerjee reached a polling booth at Gokul Nagar.
Hundreds of people came out shouting 'Jai Shri Ram' after Ms Banerjee reached the booth in. They were protesting the presence of her near the polling booth in Gokul Nagar.Ms Banerjee said, "Goons from other states creating ruckus here. People who are raising slogans are outsiders. They came from Bihar and UP, they are being protected by Central Forces."
She alleged that the CRPF is not allowing voters to go inside the centres to cast their votes.
"CRPF Jawans have not allowed genuine voters to vote in the booth number 7 of Nandigram,” the chief minister said.
TMC supporters claim that they were not being allowed to vote. Later, Ms Banerjee reached the booth along with hundreds of supporters following which saffron party supporters came out protesting against the chief minister.
The BJP supporters are demanding Ms Banerjee leave the area. They say the chief minister has brought people from outside. Police and central forces are trying to control the situation.
Ms Banerjee said BJP will not win the election in Nandigram. BJP should control its goondas (goons)...I cannot reveal what I discussed with the observers. We want fair elections. I haven't seen such a bad and unfair election as of now.
"Election Commission is favouring BJP. How is PM Modi holding rallies in West Bengal on polling day," theTMC supremo alleged during a press conference.


However, Assam, witnessed peacefull voting at 39 seats spread across 13 seats in the second phase.The Congress claimed that its grand alliance (Mahajot) candidate from Tmalpur constituency--Rangja Basumatary of Bodoland People's Front--was missing.
"Basumatary was made to disappear. The BJP should tell his whereabouts. We demand a probe from ECI," Congress leader Manish Tiwari said in Guwahati.
The ECI issued a notice to BJP leader and state minister Himanta Biswa Sarma over complaint of violating the Model Code of Conduct by allegedly threatening Bodoland People's Front chairperson Hagrama Mohilary of jail during the electioneering.
Prime Minister Narendra Modi held a rally at Kokrajhar and claimed that people of Assam has shown red card to Congress and ' Mahajot'. (Grand Alliance).
"Football is very popular among the youth here. If I've to speak in their language, I would say that the people have yet again shown a Red Card to Congress and its Mahajot," Mr Modi said while addressing an election rally at Bodo dominated Kokrajhar district in Assam.
The first phase of voting on 30 seats of Bengal and 47 of Assam was conducted on March 27 with 80 and 76 per cent polling recorded.(UNI)