New Delhi: Raghav Chadha, senior Aam Aadmi Party leader and national spokesperson, on Friday appealed to the Centre to allocate the requisite amount of oxygen to Delhi to meet its daily demand. 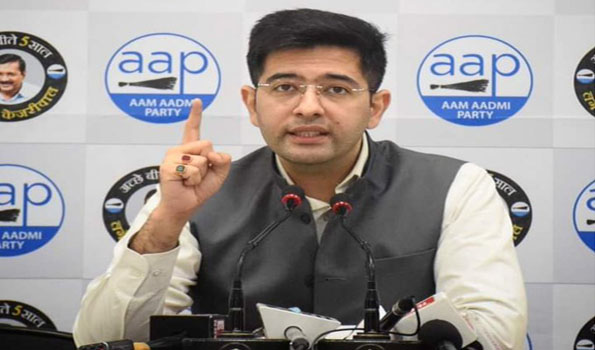 In a digital address to the media, Shri Chadha said that the demand of oxygen put forward by each state was catered to and in fact in some cases more oxygen was allocated than demanded. The only exception to this is Delhi, which did not get even 50% of what it demanded.

He said that as per the Central Government’s own formula, the appropriate amount of oxygen required for hospitals in Delhi is 976 metric tonne. Against this requirement, Delhi has been allocated only 490 metric tonne oxygen, and the actual quantity received is even lesser at 400 metric tonne.

He also said that after the Delhi government made an urgent appeal to the Centre, the allocation was increased from 376MT to 490MT oxygen, but even out of the revised allocation Delhi is receiving only 400MT oxygen, which is highly insufficient.

The MLA said that all ministers and officials of Delhi government have been burning the midnight oil to combat the latest surge of COVID, and requested the Centre to help the people of Delhi in their time of need.

The senior party leader, also MLA, said, “As per the Central Government’s own formula, the appropriate amount of oxygen required for hospitals in Delhi is 976 metric tonne. Against this requirement, Delhi has been allocated only 490 metric tonne oxygen, and the actual quantity received is even lesser at 400 metric tonne.”

Shri Chadha spoke of the Centre-constituted committee that is to look into the allocation of oxygen to different states across the country. He said, “The officials of the committee constituted by the Centre look into the production, allocation/ distribution of oxygen across the country. Now, the demand for oxygen has increased manifold, and states have requested for more oxygen to be allocated to them. Accordingly, each individual state placed its increased demand before the committee, which then allocated the same amount of oxygen as demanded by states, and in some cases, allocated more than what was demanded. The only state that was left out was Delhi, which did not even get half of its demand.”

Shri Chadha said that Delhi’s daily demand was 700 metric tonne of oxygen, but the Centre allocated just 390MT. “After fervent appeals, this amount was increased to 480MT, for which we’re thankful to the Centre. However, this amount is merely on paper. Delhi is receiving just 400 MT oxygen, and it is imperative to bridge this supply gap in order to meet our increased demand. In fact, according to the Centre’s calculations, Delhi should receive 970 metric tonne of oxygen, but as is evident, we’re getting less than half of that.”

The MLA then read out what different states had demanded and what was allocated to them, and how in some cases, states received more than what they’d asked. For instance, Punjab got 136MT oxygen against 126MT, Tamil Nadu received 136MT against 126MT, Chhattisgarh received 227MT against 215MT oxygen.

Shri Chadha said, “Delhi is the only state that did not even get half of what was to be allocated to it. I’d like to state that we’re not doing any politics here, and I humbly request the Centre to be largehearted towards Delhi and help us in our time of need.”