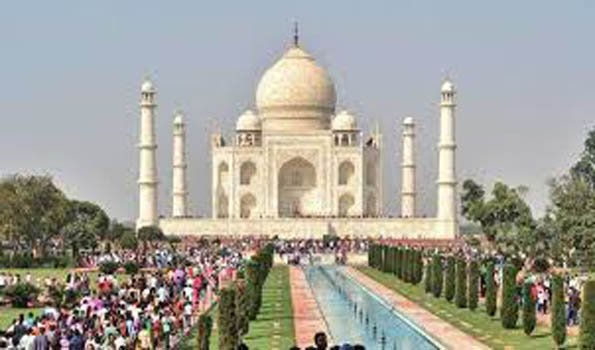 Police sources said that an anonymous phone call was received at the police helpline number 112 on Thursday morning that a bomb had been planted in the Taj Mahal which could explode any time. Subsequently, tourists began to be evacuated from the Taj Mahal premises and all the gates were sealed in view of security. The premises of the historical site were then thoroughly checked by the CISF and the Agra police jawans.

Meanwhile, police traced the anonymous call through surveillance and arrested him from Firozabad. According to the police, the arrested individual has certain mental health issues. The youth was reportedly angry at the cancellation of army recruitments and hence, he made the fake call.
On the other hand, some tourists objected to being removed from the Taj Mahal while several were spotted running out themselves. Agra Inspector General of Police Satish Ganesh said that the threat of a bomb in the Taj Mahal only proved to be a rumor. Police had searched the premises as a precautionary measure but it did not find any explosives. The accused has been arrested and strict action will be taken against him.(UNI)