“Didi will go on May 2 and she knows very well she would not come back”: PM Modi

Burdhman: Prime Minister Narendra Modi on Monday said that the people of West Bengal have decided to give a farewell to the Mamata Banerjee led TMC government and usher a double engine BJP government on May 2. 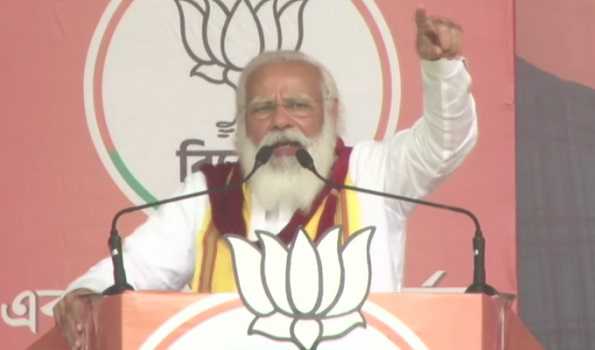 Mr Modi said in the last four phases poll for 145 seats, half of the people of the state has already thrown out “Didi” as they hit sixes like in cricket during vote.

“It is decided that the people will give a farewell to Didi on May 2,” the day the results for the 294 seats to be declared, Mr Modi said.

“Didi’s Khela is understood by Bengal people. Didi knows if she goes from here, she will never come back.”

Lashing out at the TMC government for its alleged extortion of the common people, syndicate raj and cut money policies everywhere, Mr Modi said “Didi’s people abuse even Bengal’s SC community and call them beggars.”

“Baba Saheb’s soul would be hurt by hearing such bitter words. Didi calls herself ‘Royal Bengal Tiger’. Such comments on SCs cannot be given by any TMC leader without Didi’s will,” Mr Modi said amid chanting of Jay Shree Ram from the massive audience in the open air.

He also criticised the TMC government for allegedly syphoning funds, meant for different poverty alleviation projects including money for Amphan victims and rations during the Covid situation, Mr Modi assured the people that the BJP would provide a clean government, which would serve every section of the people.

“Didi has not understood your pain. BJP will provide pure water to people of Bengal,” Mr Modi said as he accused the TMC regime of failing to deliver clean piped drinking water to the rural Burdwan.

He said the district is known for its richness of growing superfine paddy and also called the rice bowl of Bengal but the basic amenities of the people were not provided since the independence.

Bowing to the people of the district Mr Modi said this land is blessed by Lord Mahavir and mentioned two unique things for the area.

“Two things are very popular-rice and mihi dana. In Bardhaman, everything is sweet. Then tell me why Didi doesn’t like Mihi Dana. Didi’s bitterness, her anger is increasing every day because, in half of West Bengal’s polls, TMC is wiped out. In four phases, Bengal’s population has thrown sixes,” Mr Modi said.

He said after the BJP formed the government in Bengal, the farmers will be benefited more from crop Insurance Scheme.

“Due to Dr Shyama Prasad Mookerjee and Baba Saheb Ambedkar, India got Jal Vidyut policy. Bardham is called “Dhan ka Katora’. But here people are living in misery. There is no storage provision and no right price for produce. Only Didi’s syndicate is earning,” PM Modi said.

“BJP’s mantra is to serve people. TMC mantra is to loot people. In Cooch Behar, people who died were also sons. But Didi’s policies has snatched many sons from mothers,” Mr Modi, who is BJP face in West Bengal election said.

“Didi’s people abuse Bengal’s SC community & call them beggars. Baba Sahab’s soul would be hurt by hearing such bitter words. Didi calls herself ‘Royal Bengal Tiger’. Such comments on SCs cannot be given by any TMC leader without Didi’s will.”

“In the 10 years of Didi’s rule, the pain of people was not discussed as it should have been,” said the prime minister.

Citing some desperation comments of the TMC supremo Mr Modi said “Didi has said that whosoever vote for BJP will be thrown out. Is this language acceptable? If you want to express anger, do it at me.”

He said “Didi has committed a sin by insulting Dalits, SCs. Didi o didi, if you want to unload your anger, I am here. Abuse me all you want. But don’t insult Bengal’s dignity and tradition. Bengal won’t tolerate your arrogance, tolabaaz, cut money syndicate because people want ‘asol poribartan’ now’.”

Mr Modi alleged that the TMC chief has insulted the Babasaheb Ambedkar’s Jayanti, whose anniversary is on April 14.

Voting for the first four phases has been concluded.

The fifth and sixth phases of the ongoing elections will take place on April 17 and April 22, respectively. (UNI)