PM Modi warns of second wave of Covid-19, asks states to take decisive steps before it gets too late

New Delhi: As India recorded the year’s highest single-day spike of Covid-19 cases, Prime Minister Narendra Modi on Wednesday warned of a second wave of the virus transmission and asked all States and Union Territories to take decisive steps before it gets too late. 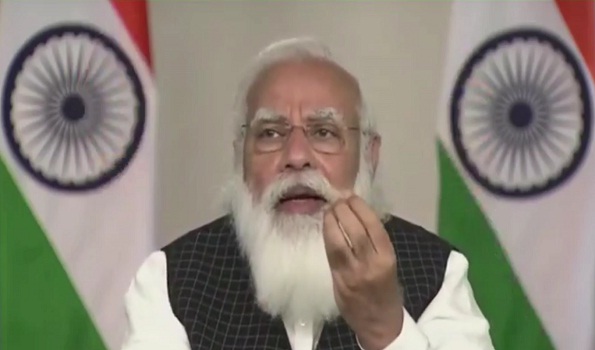 Mr Modi while addressing the chief ministers of all the States and UT said India has been appreciated around the world in its fight against coronavirus and decisive steps like micro-containment and restrictions must be taken immediately to prevent the “emerging second wave”.

“If we don’t act now, there will be a nationwide outbreak,” he warned.

The Prime Minister suggested micro-zoning of an area instead of complete lockdown and appealed for increasing daily tests and contact tracing.

Meanwhile, on the vaccination front, total inoculation reached close to 3.5 crores as per the latest data from Union Health Ministry.

However, the Opposition charged the government with moving with a “slow pace” in vaccination stating that only 0.045 per cent of the population has been vaccinated so far.

In a discussion in the Lok Sabha Congress member Manish Tewari alleged that the central government was more focused on the export of Covid vaccines instead of vaccinating its own people as over five crore doses been exported to date.

“The Government is giving more importance to vaccine diplomacy and playing with the lives of the people.’’Mr Tiwari alleged.

All India Majlis-e-Ittehadul Muslimeen (AIMIN) LS MP Syed Imtiaz Jaleel said the government envisages vaccinating 30 crore people, but as per the estimate in one year, only 10 crore people can be reached. “Our people are dying, people are standing in queues, we are supplying vaccines to other countries,” he stated.

Responding to the criticism of the pace of vaccination, Union Health Minister Harsh Vardhan in Lok Sabha said out of eight million people vaccinated all over the world so far, nearly three million are in India which is 36 per cent.

Dr Vardhan refuted the allegations of supplying vaccines to other countries at the expense of Indians, saying a balance has been stuck with due care.

He said in the coming days, to face any pandemic situation, integrated public health labs at block levels will to be set up. For tracing, an integrated health information portal will also be introduced, Dr Vardhan added.

The minister recalled Rs 35,000 crore has been arranged by the Finance Minister for vaccination. Pneumococcal vaccines which were available in only five States are now being supplied across the country, he stated.

On vaccine diplomacy, External Affairs Minister S Jaishankar stated that India’s reputation as a pharmacy of the world has been reinforced.

“Our reputation as pharmacy of the world has been reinforced. Made-in-India vaccines supplied to 72 nations. Our ambassadors feel the warmth of people across the world,” Mr Jaishankar said in a statement.

Some countries have suspended the administration of the Oxford AstraZeneca COVID-19 vaccine over reports of blood clot-related complications. (UNI)