Sabang:Defence minister Rajnath Singh on Tuesday claimed that the game of Mamata Banerjee was over and predicted a BJP's win in West Bengal's elections in which the party in the government would not discriminate against anyone on the basis of party line. 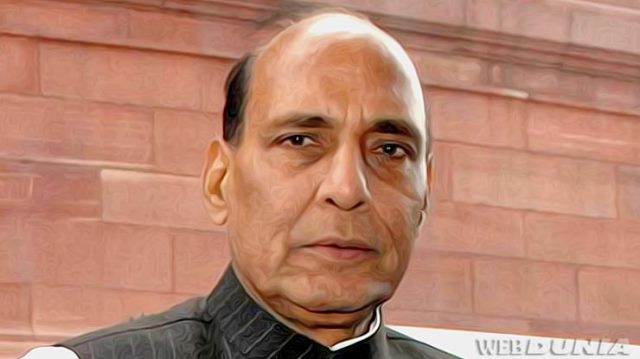 Addressing an electioneering for the BJP candidates in West Medinipur, Mr Singh, who started addressing in Bengali, told the gathering to exercise their democratic right fearlessly and vote for BJP candidates across the state.
" During the Lok Sabha elections, the slogan was 'chupchap kamal chhap 'and this time the slogan is 'Jore chap, TMC saaf,'" said Mr Singh, amid cheering from the attending crowds, who in chorus chanted "Jay Sree Ram".
" Have you ever heard BJP supporters attacking anyone? Rather, they have been attacked time and again for the lack of safety.We believe in non-violence. But we are not weak, we will not forgive those who attack us, said the Defence minister.


" I want to assure the people that the day we form the government, we'll prevent attacks against everyone, be it BJP, TMC or CPM. There won't be any discrimination. Strict action will be taken against those propagating violence," said the BJP leader.
.
He said the state of law and order was so bad that bomb factories were being allowed to operate freely.

"Look at the BJP-governed states, nobody dares to break the law there," Mr Singh quipped.
He opined that the politics should not be done to fulfil just one person's self-interests, it should be done to improve the condition of everyone in the society, which comprised many sects and different faiths. " We will change the condition of Bengal within four years of coming to power. We will ensure no will be left homeless," the defence minister assured.He said hundreds of BJP workers have been killed in the state.
" Isn't it the responsibility of the chief minister ( Mamata Banerjee) to ensure the maintenance of law and order in the state? " he said adding if you vote for BJP, the party will ensure peace in Bengal.
Mr Singh also accused the TMC government of allowing goons to go for cut money in every as;pects and the government allegedly siphoned the central funds, which were sanctioned by the NDA government headed by prime minister Narendra Modi.
" PM Narendra Modi sends so much funds from the Centre for the development of Bengal. Ask the TMC government, where does that money go? Who takes the bribe?" asked Mr Singh.
He said the BJP was one party that always stays clear of any corruption. "Nobody can blame BJP or Narendra Modi for corruption," claimed Mr Rajnath Singh.
He said Bengal was considered the cultural centre of India, but the TMC government has led to the deterioration of the state's culture.


" Now, 'cut money has taken precedence" Mr Singh alleged.Since Independence, there has been no development in West Bengal. Neither CPI(M) nor TMC have done anything for the people here, whereas the BJP has developed every state it has governed, said Mr Singh.


" Not one person in the world can point out a figure and call BJP a corrupt party,” he said as he asserted that like Sourav Ganguly, the saffron party,too, will hit a sixer in the assembly polls in Bengal."(UNI)