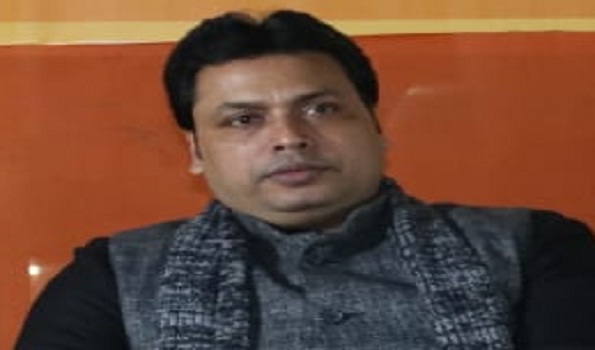 In a sudden order at midnight said, “Incumbent Chief Secretary Manoj Kumar is transferred and posted as Special Chief Resident Commissioner, Tripura Bhawan, New Delhi with immediate effect. Consequent upon his transfer departments he will remain with the senior most Principal Secretary till joining of the new Chief Secretary.”

In a separate order, the government appointed 1990 batch IAS of Tripura Cadre Kumar Alok as Chief Secretary who was posted as additional secretary in the Cabinet Secretariat. A day ago, Appointment Committee of the union cabinet approved the repatriation of Kumar Alok to Tripura on the request of the state government.

Only last year, following a serious dispute with the Chief Minister the then additional chief secretary Kumar Alok had gone to central deputation. Immediately after assuming office Biplab Deb had brought back Kumar Alok from the central deputation in 2018 and posted him as his Principal Secretary. Kumar Alok was blamed at all levels for some vindictive decisions of the government including removal of the then health minister Sudip Roybarman.

Within two years, a serious dispute arose between Chief Minister and Kumar Alok over functioning of the government and reportedly, many illegal moves of the chief minister and other ministers were prevented by him, which hostiled the situation. The government didn't consider him as Chief Secretary that time and had appointed his batch mate Manoj Kumar as CS.

A few months after Biplab Deb became Chief Minister the then Chief Secretary Sanjib Ranjan had opted for central deputation. Then Lalit Kumar Gupta -known to be a legend in the administration was made CS but he had to resign. The next senior Dr U Venkateswarlu became CS and after his retirement in November 2019, Manoj Kumar was appointed as Chief Secretary.

According to report, Manoj Kumar recently has developed a strained relationship with the Chief Minister over administrative functioning of the government. He was also reportedly abused in the cabinet on a number of occasions and many files related to policy implementation were held up with him, as he didn't agree with the Chief Minister and for last few weeks CM was avoiding CS, which has created unrest in the administration.

Manoj Kumar has left for Delhi this morning and the new Chief Secretary will join this week, officials said. (UNI)