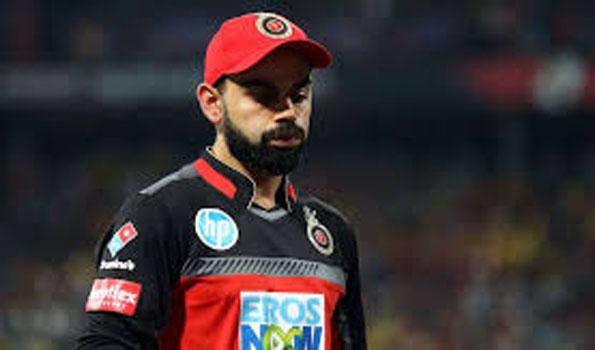 Kohli was charged with a Level 1 breach of clause 2.2 which relates to “Abuse of cricket equipment or clothing, ground equipment or fixtures and fittings during a Match”.

The RCB captain was reprimanded for hitting the boundary cushion as well as knocking down a chair near the dugout with his bat while walking back to the dressing room after being dismissed by SRH all-rounder Jason Holder on Wednesday.

“Mr Kohli admitted to the Level 1 offence 2.2 of the IPL’s Code of Conduct. For Level 1 breaches of the Code of Conduct, the Match Referee’s decision is final and binding,” said the IPL in a statement.

The incident took place in the 13th over of RCB innings when Kohli top edged a Holder delivery to fine-leg where Vijay Shankar took a good diving catch to dismiss the RCB skipper for 33. He wasn’t happy about his dismissal and his agony was clearly visible.

However, left-arm spinner Shahbaz Ahmed (3/7) and Glenn Maxwell (59 off 41) led Royal Challengers Bangalore to six-run win over Sunrisers Hyderabad. The win propelled RCB to the top of the points table. (UNI)