Dubai:New Zealand fast bowler Kyle Jamieson has been fined 15 per cent of his match fee for breaching Level 1 of the ICC Code of Conduct during the second ODI against Bangladesh in Christchurch, the cricket governing body said. 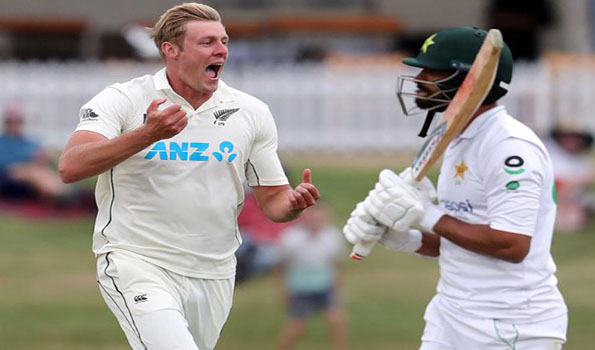 ''Jamieson was found to have breached Article 2.8 of the ICC Code of Conduct for Players and Player Support Personnel, which relates to “showing dissent at an Umpire’s decision during an International Match,'' the ICC said in a statement on Wednesday.

''In addition to this, one demerit point has been added to the disciplinary record of Jamieson, for whom it was the second offence in a 24-month period, taking his cumulative demerit points to two,'' it added.
The incident occurred on Tuesday in the 15th over of Bangladesh’s innings when Jamieson reacted angrily to the TV umpire’s decision ruling Tamim Iqbal’s return catch had not been taken cleanly by Jamieson.
Jamieson admitted the offence and accepted the sanction proposed by Jeff Crowe ICC Elite Panel of Match Referees and ratified by the ICC Cricket Operations department as per the COVID-19 interim playing regulations. There was no need for a formal hearing.
On-field umpires Chris Gaffaney and Chris Brown, third umpire Wayne Knights and fourth official Ash Mehrotra levelled the charge.
Notably, Level 1 breaches carry a minimum penalty of an official reprimand, a maximum penalty of 50 per cent of a player’s match fee, and one or two demerit points.
When a player reaches four or more demerit points within a 24-month period, they are converted into suspension points which could result in a ban.

New Zealand took an an unassailable 2-0 lead in the three-match series after beating Bangladesh by five wickets in the second ODI. The third game will be played on Friday at Wellington.
UNI