Kolkata:A. Sharath Kamal and Manika Batra, after all,will now be a part of the Indian table tennis contingent at the Tokyo Olympics this July-August. 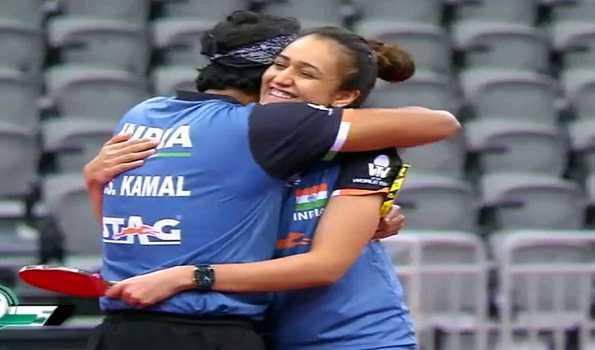 The Indians, staging a fine comeback, defeated South Korea’s Lee Sangsu and Jeon Jihee 4-2 (8-11, 6-11, 11-5, 11-6, 13-11, 11-8) in the mixed doubles of the Asian Qualifications in Doha on Saturday. Thus, the two have etched their names in the history books to be the first Indian pair to qualify for a mixed event in the introductory

Games at Tokyo, according to Table Tennis Federation of India secretary general Arun Kumar Banerjee. The Indians had a 1-1 win-loss record before today’s final against the Korean pair—the Indians won at the Asian Games (Jakarta) and the Koreans, in Germany in 2019.

“The fifth game was very crucial. Even before we were trying to open out, the Koreans finished the points. Their lead was sizable, but Manika could slow down to enable me to attack and play aggressively.We saved two game points in the end to win and it gave us the confidence,” said an exhausted Sharath after the match.

In the sixth, it was the Koreans on the ascendancy all the way, leading 4-8. The Indians slowly made it 7-8 when the Koreans took their timeout. But it was the Indians who made it 8-all and then collected the remaining three points for seven on the trot.

Describing the sixth game, Sharath said it was equally fantastic. “We thought we lost it because a four-point lead was considerable. But Manika did well to adjust to my pace and I could play my attacking game. It was necessary at that point of time,” added Sharath. In the 56 minutes of play, the second-seeded pair had conceded a maximum of six points lead to their opponents while overcoming four deficit points. They also won more service points as compared to their
opponents.
Expressing their collective sigh of relief, Sharath said the results were incredible. But he did admit that the two needed to play more often now that the two have qualified for the mixed event to hit a rhythm. “We will have to sit down and chalk out our plans. We cannot tour Europe or elsewhere because of the situation. Probably, the WTT China hug could be the best option for the moment. Let’s see what is in store,” said Sharath, talking of their plans for the immediate
future.
Sharath admitted that the duo would aim for a quarterfinal place in Tokyo because that will be more than a satisfying performance in the Olympics. “I think if we can reach the quarters, it would be a fantastic result for us at the Games. Anything else from there is a bonus,” said Sharath. The duo, however, will have to wait for their singles entry confirmation at the Games, based on their next month’s world rankings.(UNI)