The search for people onboard a barge that sank during a massive cyclone in India has entered the third day. Bodies of 37 people have been recovered in the operation so far.(PIC-UNI) 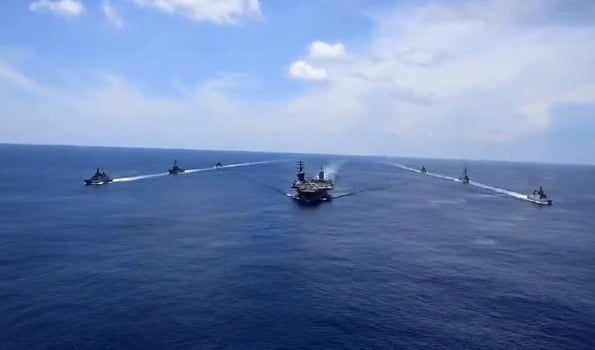 The Indian Navy scoured waters through the night to recover bodies of 37 people who were onboard a barge that sank off Mumbai as a cyclone ravaged the country's west coast. Some 38 people remain missing.
"Search and rescue (SAR) operations off Mumbai and Gujarat entered their third day today. Indian Naval ships and aircraft are presently undertaking SAR of the missing crew members of accommodation barge P-305, which sank on May 17, 35 miles off Mumbai," a navy spokesperson said in a statement.
The barge was deployed on contract by state-run energy explorer Oil and Natural Gas Corporation (ONGC) to carry people engaged for offshore drilling.
It had 261 people onboard when it sank after the Cyclone Tauktae barreled into the Bombay High oilfield near Mumbai.
Cyclone Tauktae, which hit the western states of Gujarat and Maharashtra on Monday, is the strongest storm the region has seen in decades. It has killed at least 62 more people over the past two days.
New storm brewing
Prime Minister Narendra Modi on Wednesday conducted an aerial survey of the damage, promising government aid.
Meanwhile, a major new storm is building off India's east coast in the Bay of Bengal, weather forecasters warned on Thursday.
The system was "very likely" to intensify gradually into a cyclone, which is projected to hit the coasts of the states of West Bengal and Odisha around May 26.
The damage from Cyclone Tauktae has added further pressure on a country that is battling a deadly second wave of the coronavirus amid a shortage of beds and oxygen in medical facilities.


Indian Naval ships and aircraft are currently engaged in Search and Rescue (SAR)operations to locate the 38 missing crew members of Accommodation Barge P-305, which sank on May17, 2021, 35 miles off Mumbai.INS Kochi, Kolkata, Beas, Betwa, Teg, P8I maritime surveillance aircraft, Chetak, ALH and Seaking helicopters are involved in the SAR operations.INS Talwar has also been diverted to provide assistance in relief and rescue operations. A total of 186 people of barge P-305has been rescued as of 7 am on May 20, 2021 and 37 mortal remains recovered.
Off the Gujarat coast, INS Talwar had assisted Support Station 3 and Drill Ship Sagar Bhushan, which are now being safely towed back to Mumbai by ONGC support vessels. Food and water to the 300 odd crew members of these vessels was also provided by the naval helicopters from Mumbai.
The Indian Coast Guard ships are also involved in SAR operations and have brought to safety crew of various adrift Indian Fishing Boats namely Badhriya, Jesus, Milad, Christ Bhavan, Pariyanayaki and Novas Ark off the coasts Kerala, Goa and Lakshadweep. The ICG and IN ships worked in coordination to evacuate nine crew members of MV Coromandel Supporter-IXoperating for Single Point Mooring (SPM) operations off New Mangalore Port.
ICGS Samrat, two ICG helicopters from Daman and one Indian Navy Seaking Helo from INS Shikra, Mumbai safely evacuated 137 personnel who were aboard MV Gal Constructor that was reported adrift North of Mumbai due to non-availability of power.
Earlier, the Indian Air Force had deployed its C-130J and An-32 aircraft to transport nearly 400 personnel of NDRF and 60 tonnes equipment to Ahmedabad.The Indian Army had mobilised two columns from Jamnagar for Diu along with Engineer Task Force. Two more columns were also staged forward to Junagadh for immediate response. The Army was also involved in clearing of roads and providing food and shelter to the needy.