Kolkata: The Election Commission of India (ECI) on Wednesday issued notice to West Bengal Chief Minister and Trinamool Congress (TMC) supremo Mamata Banerjee over her statement on April 3, “appealing to Muslim voters to not let their vote be split among different political parties and demanding votes on communal ground for TMC”. 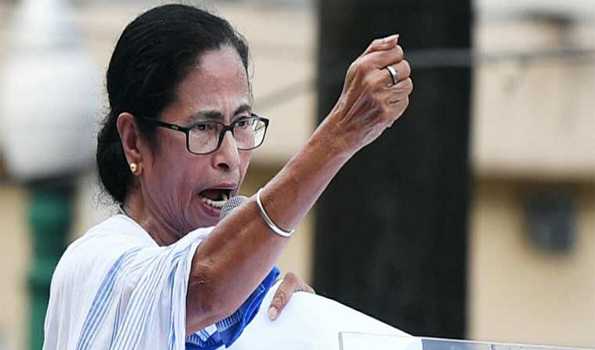 The ECI asked her to explain her stand within 48 hours.

In its notice, the Election Commission said after examining an authenticated transcript of Mamata Banerjee’s speech from the said date, it is of the view that she has violated the Representation of People Act, 1951 and also the Model Code of Conduct for elections.

“Now, therefore, the Commission gives you (Mamata Banerjee) an opportunity to explain your stand in making the above said statement, within 48 hours, failing which the Commission shall take a decision without further reference to you,” the EC notice said.

The notice against the chief minister comes after Bharatiya Janata Party (BJP) members met the poll officials seeking action over the matter.

The BJP alleged that Mamata Banerjee in her speech promoted enmity between Hindus and Muslims.

Union Minister Mukhtar Abbas Naqvi, BJP national secretary Sunil Deodhar, senior leader G.V.L. Narasimha Rao and others had met the poll panel and submitted a memorandum which stated that Mamata Banerjee in an election meeting at Tarkeshwar on April 3 had appealed to Muslim voters, asking them to not split their votes among different political parties.

Addressing an election rally in Tarakeshwar in Hooghly district on April 3, Ms Banerjee urged the minorities “with folded hands” to not divide their votes after listening to the BJP.

Ms Banerjee had asked Muslims to not listen to Indian Secular Front’s (ISF) Abbas Siddiqui and AIMIM’s Asaduddin Owaisi during the rally.

The TMC supremo also alarmed the minority voters, saying that if the BJP came to power in Bengal, they would be in grave danger.