New Delhi:Prime Minister Narendra Modi on Tuesday greeted the people on the occasions of Chaitra Navratri, Ugadi and other festivals today and over the next few days.Festivals showcase the country's diversity and spirit of ‘Ek Bharat, Shreshtha Bharat, he tweeted. 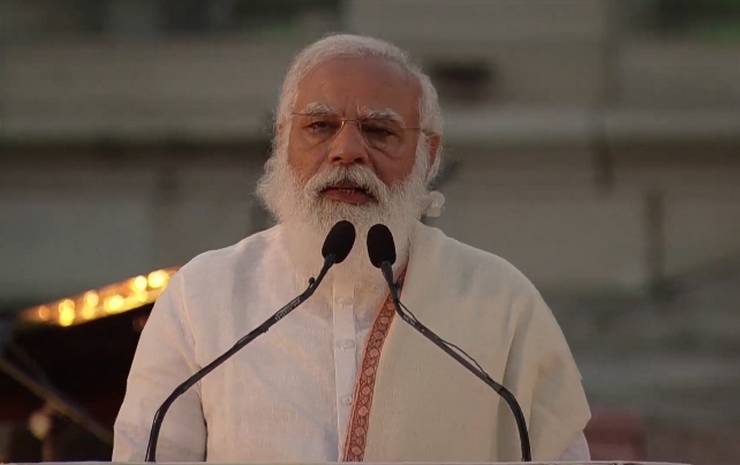 Extending his greetings on Navratri festival that spans nine nights and ten days and is celebrated every year in the autumn, the Prime Minister said, 'May the auspicious occasion bring wellness and joy in people's lives.'
Mr Modi also greeted people on the occasion of Ugadi. Also known as Samvatsaradi, Ugadi is the New Year's Day for the states of Telangana, Andhra Pradesh and Karnataka.
“May the coming year bring good health and prosperity in everyone’s lives,” he said as he wished on Gudi Padwa. A spring-time festival, Gudi Padwa marks the traditional new year for Marathi and Konkani Hindus. It is celebrated in and near Maharashtra and Goa on the first day of the Chaitra month to mark the beginning of the New year.
In another tweet, the Prime Minister greeted the people on Baisakhi saying, 'May the auspicious festival bring happiness and prosperity in everyone’s lives. This festival has a special link with nature and our hard working farmers. May our fields flourish and may it inspire us to care for our planet.”
Baisakhi is observed by Hindus and Sikhs. It also marks the beginning of Hindu and Sikh solar New year.
On the occasion of Sindhi festival Cheti Chand, the PM wrote “Greetings on Cheti Chand, particularly to the Sindhi Community. May the special blessings of Lord Jhulelal always remain upon us. I pray that everyone’s wishes be fulfilled in the coming year.”
Besides, Modi extended his wishes on other festivals like Navreh, Nav Samvatsar and Sajibu Cheiraoba.
Ajit Pawar wishes peoples of state on occasion of Gudi Padwa
Mumbai:State Deputy Chief Minister Ajit Pawar on Tuesday wished the people of the state a happy Gudi Padwa and Marathi New Year, saying that one of those high Gudhis of success should be the victory of Gudi 'Coronamukti'.
Mr Pawar had also appealed to everyone to celebrate the festival of Gudi Padwa, which has a unique significance in Marathi culture, with joy, enthusiasm and following the anti-corona rules.
While wishing the people, Mr Pawar said that the festival of Gudi Padwa has a unique significance in Indian and Marathi culture.
Although this year's Gudi Padwa cannot be celebrated collectively because of coronavirus, let's simply celebrate Gudi Padwa this year by following the anti-corona rules, he said adding that after defeating Corona, we have decided to celebrate next year's Gudi Padwa together.
Goa CM extends Gudi Padwa wishes
Panaji: Goa Chief Minister Pramod Sawant has extended his best wishes to the people of Goa on the eve of Gudi Padwa.
The Chief Minister in his message said,''Gudi Padwa festival is celebrated on the first day of the Chaitra Month to mark the beginning of the New year as per the lunisolar hindu calendar. This festival is also known to be a harbinger of joy and prosperity to everyone.''
The Chief Minister said, “I pray Gudi Padwa becomes new beginning of our dreams, hopes and happiness. May this wonderful year bring success, happiness and best health to each one