7th phase polling in 34 Assembly constituencies of Bengal on Monday

Kolkata: A lull pervades in West Bengal going to the seventh of the eight-phase Assembly election on Monday for 34 seats owing to virulent second wave of Covid-19 and stringent measures enforced by the Election Commission which includes blanket ban on rallies and roadshows. 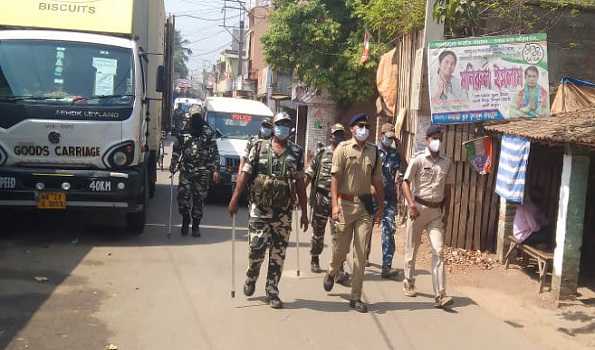 During the seventh Phase, total 268 candidates including 37 women will be vying for the 34 out of previously scheduled 36 Assembly seats spread over five districts of West Bengal as the poll process in respect of Samserganj and Jangipur was adjourned by the EC following deaths of the candidates in the two constituencies.

The EC has issued a fresh poll notification in respect of Samserganj and Jangipur Assembly constituencies. The polling in these two constituencies will now be held on May 16 and the whole process of elections will be completed by May 21.

The polling process is already over in respect of 223 out of total 294 Assembly seats in the earlier six phases.

On Monday, polling will be held in the five districts which include Malda Part I, Kolkata South, Murshidabad Part I, West Bardhaman Part and Dakshin Dinajpur.

The Election Commission has made elaborate security arrangements with the deployment of central and state forces to ensure a free fare and peaceful poll.

Over 81.88 lakh voters including 39.87 lakh women and 221 third gender persons will decide the fate of these candidates. Total 11,376 polling stations have been set up for this purpose.

Ruling AITC and Bharatiya Janata Party are contesting for all the 34 seats. Congress, Left parties and their alliance partner Indian Secular Front are fighting under the banner of Sanyukta Morcha. Bahujan Samaj Party has fielded 25 candidates, Congress has 18, CPI (M) - 12, ISF - four, RSP- three and AIFB - one while there are 63 independents along with 74 others are also in the fray.

The prominent candidates participating in this phase include State Ministers and TMC candidates Subrata Saha from Sagardighi, Firhad Hakim from Kolkata Port, Subrata Mukherjee from Ballygunge,Malay Ghatak from Asansol Uttar along with Sovondev Chattopadhyay who is taking on BJP candidate and actor Rudranil Ghosh from Chief Minister Mamata Banerjee’s erstwhile constituency of Bhabanipur.

In addition, Jawaharlal Nehru University Students Union President Aishi Ghosh is the CPI (M) candidate from Jamuria while BJP candidate and Fashion Designer Agnimitra Paul and TMC candidate Saayani Ghosh are vying with each other in Asansol Dakshin. (UNI)