Hyderabad: Jhansipriya Laveti and Vaishnavi Veeravamsham both sailors from Hyderabad, Telangana have been selected for the World Championships at Lake Riva Del Garda, Italy starting from July 1, 2021. 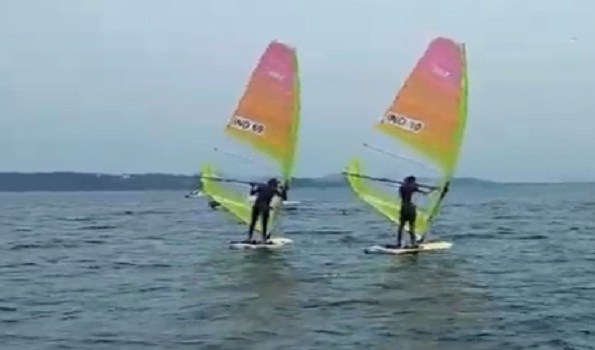 This is a first ever for the state of Telangana that two girls in the same year have been selected for the World Championships in the Sub Juniors, a release here said.

The Under 16 Worlds will be attended by 264 sailors from across 60 countries making it the most deeply competitive regatta for youth on the planet.

Riva Del Garda is one of the largest lakes in Europe is in the picturesque northern part of Italy, not far from Verona and provides challenging sailing conditions. Garda is host to all the largest Sailing Championships in the world and despite being a lake simulates huge waves and is backed by sky high cliffs. The kids await their time on the water at what can be considered the Mecca of Sailing Championships.

Given the second wave Covid lockdowns and quarantine issues, there are many challenges both for the sailors travel and organisers to hold the games at Italy.

Jhansipriya's mother is a single parent and works as part of the housekeeping team at the Yashoda Hospital is all excited and happy about her daughter going for her fourth International after the 2019 Oman Asians and the Atlantic Week at Portugal and Spain.

Vaishnavi's mother works as domestic help at various houses in Marredpally and cannot believe that her daughter is India No.2 and will be carrying the tricolour to Italy for a World Championship.

Both Jhansi and Vaishnavi, students of Udbhav School at Rasoolpura, joined sailing in 2018 and rapidly rose to the top of the Indian fleet. (UNI)